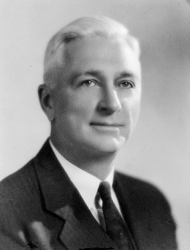 American-born Warren H. S. McFarland graduated from the University of California in 1906 and shortly thereafter found work with the Yukon Gold Company in Dawson City. He worked in the mining field in the Yukon and Alaska for the next forty years.

McFarland continued to work for the Yukon Gold Company in a number of positions for fifteen years, first in Dawson City, and later at Keno Hill. In 1923 he joined Burral and Baird, and put it and another Klondike dredging Company, the New Northwest Corporation, on a sound operational footing.

Fired by ANC Treadogld in 1925, he went to Alaska to manage mining concerns in the Fairbanks area. After Treadgold was removed from management of Yukon Consolidated Gold Corporation (YCGC), McFarland returned to the Klondike as General Manager in 1934 and oversaw the successful operation of the YCGC until he retired in 1947. He remained a consultant and director of YCGC until 1961.

Known simply as “The Company”, YCGC, under McFarland’s management, was the Yukon’s largest employer. Combining a program of exploration, testing of placers, and construction of a fleet of new dredges, YCGC operated profitably through the Depression and the following decades until it ceased operation in November, 1966.